Selena Gomez, Justin Bieber, and Hailey Baldwin Are Sick Of This Drama!

Selena Gomez’s ex Justin Bieber and his wife Hailey Baldwin are tired of the Selena vs. Hailey anecdote.

Earlier this week, the famous singer Justin without mentioning Selena’s name told fans on his Instagram story: “This sad excuse of a human just encouraged people on video to literally go after my wife, telling people to say that my previous relationship was better so on and so forth. I just wanted to share this so that people get an idea of what we face on a day to day. It is extremely hard to choose to take the high road when I see people like this try and rally to gather people to bully the person I love the most in this world.”

This long message Justin wrote in reply to a person who was trying to provoke fans of Justin’s prior romance Selena Gomez to harass Hailey and “go after her” by posting rude messages and comments during an Instagram Live.

After husband’s remarks, Hailey posted her response as well on the matter, looking to move on from all the negativity resulting from the original post — both toward her and the woman in the video who was encouraging fans to insult her.

She wrote, “I usually stay quiet and don’t acknowledge these things because I need to protect myself and my mental.” “But it has truly gotten to a level of anger and hate that is shockingly unhealthy and sad,” Hailey added. 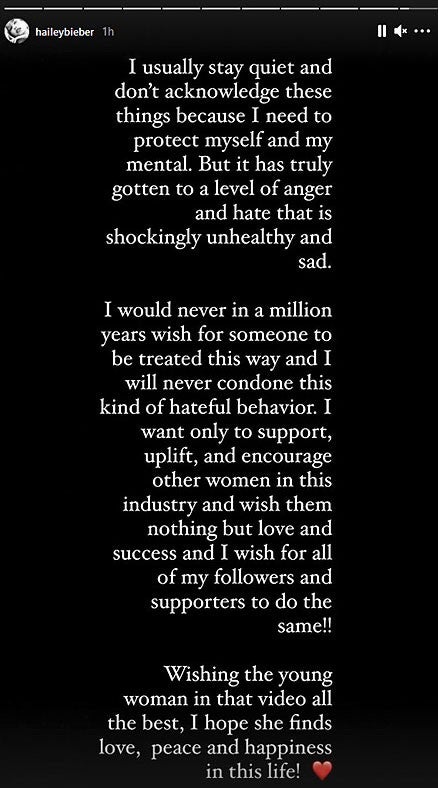 Rumours are circulating that the talented singer is dating NBA player Jimmy Butler, a source tells ET Magazine that Gomez, 28, is not anxious to jump into any sort of serious relationship right now.

“Selena has enjoyed hanging out with Jimmy, but she is keeping her options open in terms of guys,” the source says. “She is comfortable dating, but also comfortable being single. She’s not rushing into anything whatsoever.”

The source adds, “Selena is focusing on what makes her happy and what feels good to her — whether that’s a relationship or not.”

“The qualities that stand out to her in terms of a potential boyfriend are confident, supportive, smart, funny, trustworthy, and reliable,” the source notes.

Selena Gomez opens up about her disturbed, depressing relation with Justin Bieber

US popular singer Selena Gomez's past and failed relationship with singer Justin...

Noaman Sami has been seen in many Pakistani dramas doing an absolutely...

Johnny Depp May Never Appear In ‘Pirates Of The Caribbean’ Again

Johnny Depp's ex-wife Amber Heard is digging up dirt on the actor's...