Yasra Rizvi, one the fine actresses of Pakistani showbiz, has faced extreme criticism for her role with racist tendencies and alcohol dependency in web-series Churails.

Now, Yasra Rizvi has landed in another controversy for her recent drama serial ‘Dunk‘.

Social media users were conflicted about their opinion of the actress, calling her out for choosing to be a part of a show like Dunk after a feminist powerhouse of a performance in Asim Abbasi’s Churails.

However, responding to the critics, the Mann Ke Moti starlet said people don’t “really know” who she was or even her work.

Taking to Instagram, Yasra clapped back at all the criticism and posted a long note saying, “Many saw Jugnu as a drunkard druggie who was selling behayai in the name of women empowerment and many think Saira [from Dunk] will cause serious negative repercussions for harassment victims because she is a character in a story about false allegations,” said Yasra.

“No one really knows who I am and what I do every day, how I work, what I truly believe in. Many haven’t watched Churails or will not watch all the 20 something episodes of Dunk, many don’t know anything about my body of work and its detail to really understand what is it that I even stand for,” she added.

“But everyone gets to talk because I am out there doing my thing, so talk away! Cheers to that!”

On thee other hand, extending support to the actress, Mansha Pasha jumped in to slam the netizens saying, “Most people are too busy pointing fingers to actually look within themselves anyway.”

“Keep being fabulous and doing what youre doing – i.e. being an ACTOR! You don’t owe anyone explanations as most people are too busy pointing fingers to actually look within themselves anyway. Love and strength!,” commented the Khudgharz star. 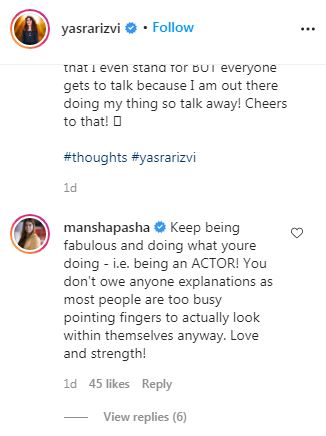 An analysis of the ‘fragile’ Pakistan-US friendship