These two well-known actors of Turkey are from the historical drama series Dirilis Ertugrul. Nurettin played Bamsi Beyrek while Ayberk took on the role of Artuk Bey.

According to the details, Nurettin Sönmez aka Bamsı Beyrek and Ayberk Pekcan aka Artuk Bey arrived in Pakistan along with the Turkish Foreign Minister Mevlut Cavusoglu.

Mevlut Cavusoglu along with a 20-member delegation arrived in Islamabad on Tuesday.

As per the sources, Nurettin Sönmez and Ayberk Pekcan are also part of the Turkish delegation.

Fazeela uploaded her Instagram story after she was met with Turkish actors.

She captioned the picture “A wonderful evening with Bamsay and Arthuk Bey.”

Have a look at her story: 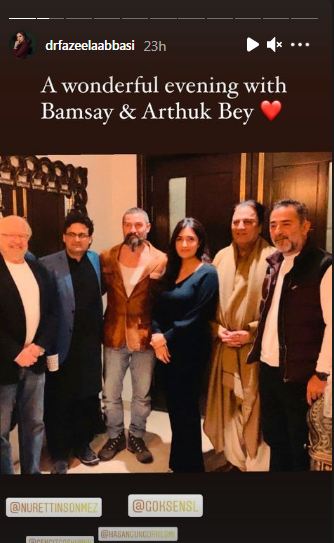 Does Sami Khan Regret Not Marrying His First Love?

Jungle Cruise Earned a Third of its Revenue from Disney Plus

On Monday, Malaysian opposition lawmakers marched to the parliament building in Kuala...

Does Sami Khan Regret Not Marrying His First Love?

Acclaimed showbiz actor Sami Khan, who landed in the showbiz industry from...

Tesla Megapack caught fire during initial testing of the most awaited new...