Engin started his career in 2001 as a supporting actor in the Turkish drama series Ruhsar, since then, he has worked in several movies and drama series.

However, Engin’s popularity rose, especially in Pakistan, after he appeared in the Turkish drama series Dirilis: Ertugrul as the main lead.

the Dirilis: Ertugrul star can be seen wearing a brown jacket paired with blue jeans, joggers, and a blue cap. The cool look of the Turkish star has garnered love from his fans.

“Brother, you are married. You cannot share such cool photos. You can’t play with our bread.” 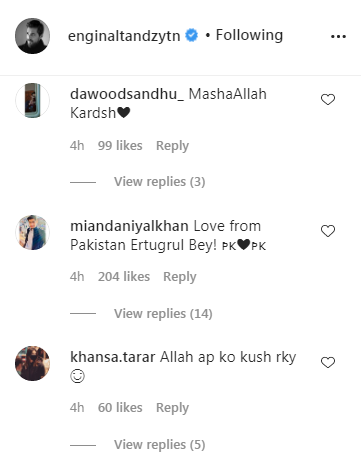 Engin Altan Duzyatan, the leading actor of the Turkish series ‘Dirilis: Ertugrul’, has reportedly canceled his $1 million deal with Pakistani businessman Kashif Zameer, who invited him to Pakistan for business purpose.