Riddle That Will Wreck Your Brain

Pakistani actress Minal Khan surely misses her father a lot and everyone can understand the pain her family must be going through.

Aiman and Minal Khan’s father passed away on 31st December 2021 after struggling with major health issues.

Taking to Instagram, the Jalan actress uploaded a photo of her late father and sister Aiman Khan and penned down a heartfelt caption.

Earlier, actor Muneeb Butt, the husband of actress Aiman Khan, posted a story on popular photo sharing app Instagram in which he said that Aiman and Minal’s father has passed away. 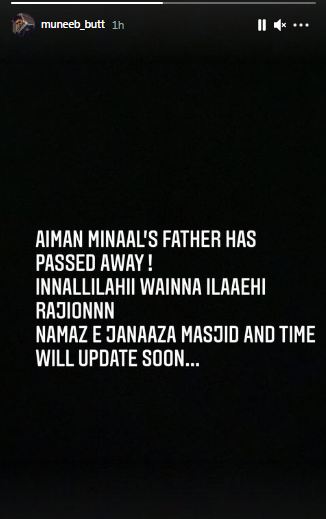 Why did Nimra Khan delete all of her husband's Instagram photos?

Kinza Hashmi confesses, "I'm here to work and will continue to working"

KARACHI: The benchmark KSE-100 index closed in the red zone on Thursday, where...

Why did Nimra Khan delete all of her husband’s Instagram photos?

Nimra Khan is a Pakistani actress. She was born on 26th June...

UN ‘deeply concerned’ about civilians trapped by fighting in Afghanistan

UNITED NATIONS: The United Nations is ‘deeply concerned’ about the safety and...

Pakistani expatriates continue to remain stranded in their home country. They cannot...