She went on to call it a ‘masterpiece’ film and encouraged her fans to watch it. She also uploaded a poster of the movie to her Instagram story and tagged Rajkummar Rao. 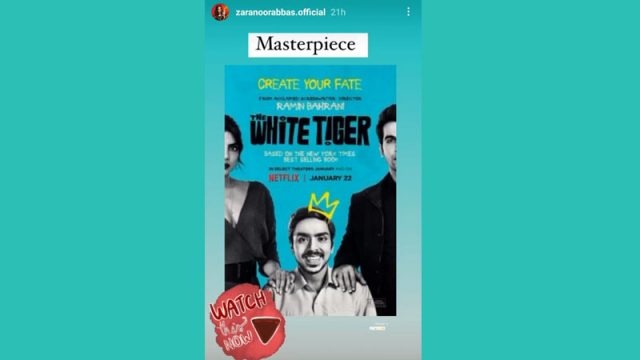 Replying to Zara, Rao reposted her story and thanked her for her kind words and appreciation. 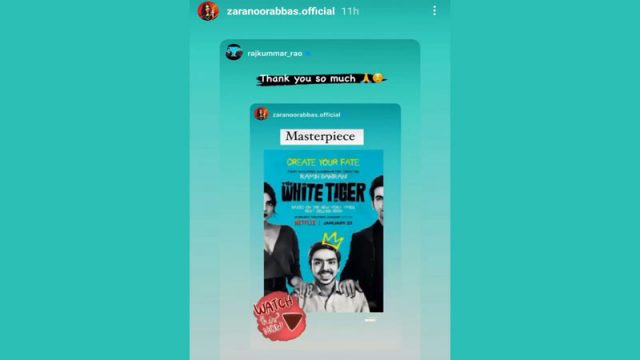 The White Tiger features stars like Gourav Adarsh and Priyanka Chopra, who is also the executive producer for the film.

It is the first time Rao and Priyanka are appearing alongside on the screen.

Priyank Chopra’s husband, Nick Jonas, took to his Instagram and urged fans in a post to watch the movie, saying he is “incredibly proud” of his wife.

The film is an adaptation of Aravind Adiga’s 2008 Booker Prize winning novel. It highlights chronicles from rags to riches and the life of a sweet-maker, Balram Halwai.

The film screened on Netflix on 22nd January.

Hina Durrani, daughter Noor Jehan and actor Ejaz Durrani, who has been...

The 12th match of Pakistan Super League (PSL) season 6 has been...

US Dollar Rate Continues To Decrease, Sold At 157.85 PKR

The US Dollar has increased on the second day of the trading week...

Pakistan Foreign Office has strongly condemned the recent attacks launched by the...