Zarnish Khan is in love with striped dresses, says “it can’t go out of fashion”

Zarnish took to Instagram and shared her stunning snaps wearing a dress with black-white stripes and she absolutely nailed the look.

“I don’t think stripes can go out of fashion,” she captioned the post. And it seems like the actress is in love with stripes.

Soon after posting the pictures, actor Zahid Ahmed jumped into the comments section and left a sarcastic comment over Zarnish’s caption. 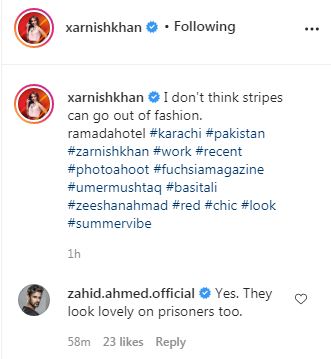 Zarnish Khan is spreading some positive vibes with her Insta fam

Gorgeous showbiz’s actress Zarnish Khan has shared an inspirational quote with her Insta...

Actress Zarnish Khan is well-known for her appearance in Urdu television serials. She has played a role of Alizeh in Susraal Mera for which she received Hum Award for Best Soap Actress. Later she played the role in Aye Zindagi and Sehra Main Safar.

Yeh Dil Mera, was Zarnish’s last project she worked on, which was a hit. In the serial, she starred alongside Adnan Siddiqui and Mira Sethi as Ahad Raza Mir’s mother.