Pakistani showbiz personality, Aiman Khan offered a prayer for the renowned Pakistani mountaineer Ali Sadpara, who is still missing from his K2 trek with his team.

Sadpara, along his with his fellow mountaineers, Jon Snorri and Juan Pablo Mohr have been missing since 5th February during their hike to Mount K2. They were expected to head to K2 in the winter on February 5 but lost contact with base camp on Friday night.

Helicopters flew up to 7,000 meters yesterday to trace the three climbers after they lost contact with the base camp, but no trace was found and on February 7 the rescue mission was resumed but so far no trace found.

Aiman Khan took to her Instagram account and shared a throwback photo of Sadpara to her story and wrote, “Praying for you.” 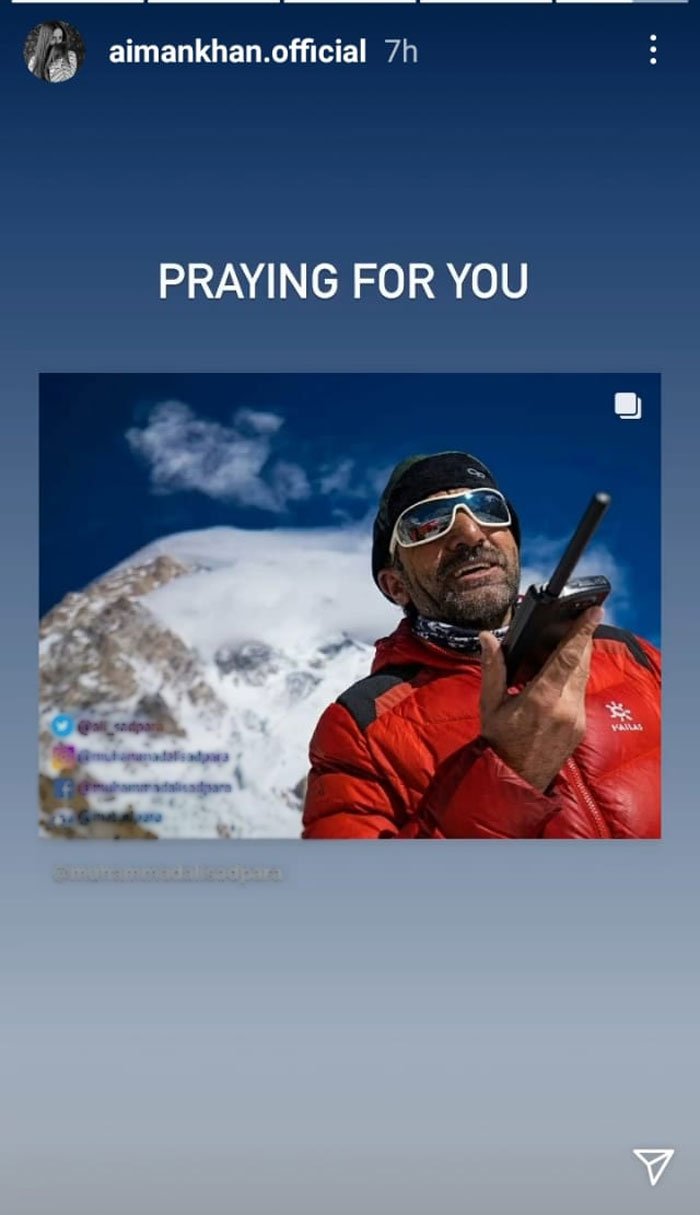 Taking to Twitter, Bukhari said that high altitude porters and Lama helis will restart the search at the crack of dawn.

Prayers needed from everyone for their safe return,” he added.

PM @ImranKhanPTI & COAS Gen Qamar Bajwa are concerned and personally following all developments regarding our missing mountaineers. High alt porters & Lama helis will restart search at the crack of dawn.
Prayers needed from everyone for their safe return!#k2winterexpedition2021

Ali Sadpara has a record of climbing eight of the highest peaks in the world and hoisting the Pakistani flag there. In 2019, he climbed the world’s fifth-highest peak at 8,485 meters in Nepal. He is the first Pakistani mountaineer to have climbed seven mountain peaks above 8,000 meters in the world.

Ali Sadpara celebrated his 45th birthday at K2 Base Camp on February 2, before he started his expedition.