A video clip of Pakistan’s leading actor and host Yasir Hussain is going viral and he is being criticized by internet users for it.

A short video clip from an interview with Yasir Hussain on Instagram is going viral in which he is present as a guest in a talk show and talks about his marriage.

Yasir Hussain said in the video that “he had invited very few guests to his wedding but some of the guests forcibly invited themselves.”

The host of the show asked Yasir Hussain who were the guests who came forcibly, to which Yasir Hussain mentioned the name of well-known actress and supermodel Nausheen Shah.

Yasir Hussain’s viral video is facing a lot of criticism by fans. 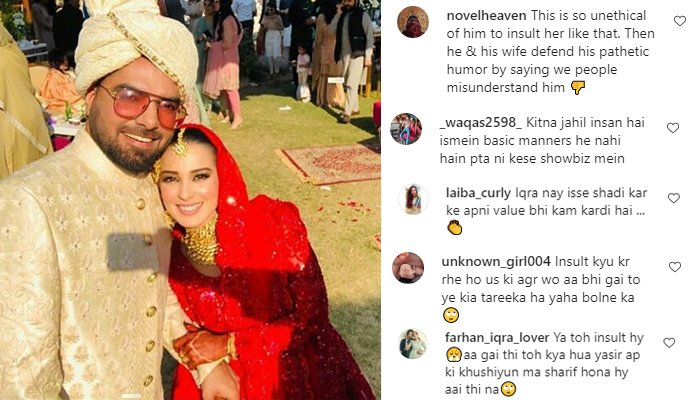 In other news, an Instagram user sharply criticized Yasir Hussain and said that “Iqra Aziz has also diminished her value by marrying Yasir Hussain.”

The name of Iqra Aziz, a popular actress of the Pakistani drama...

Mckenna Grace the child star girl who got fame through the horror...

Pakistan Skipper Babar Azam on Wednesday finally achieved his quest to be...

Can you spot 5 differences between these two pictures?

These two pictures look quite similar, but there are eight differences. In...

After getting the number one position in ICC ODI rankings, Pakistan skipper...

Ambassador of Japan to Pakistan on Wednesday called on Chief of Army...