The Tamgha-e-Imtiaz recipient shared new photos on her social media platforms, Twitter and Instagram which have surprised her fans and followers.

There’s method to my madness.. 💣 pic.twitter.com/TbZSmV8WJK

Sharing her new photos, Mehwish Hayat wrote in the caption, “There’s method to my madness.” The actress also used a bomb emoji in the caption. 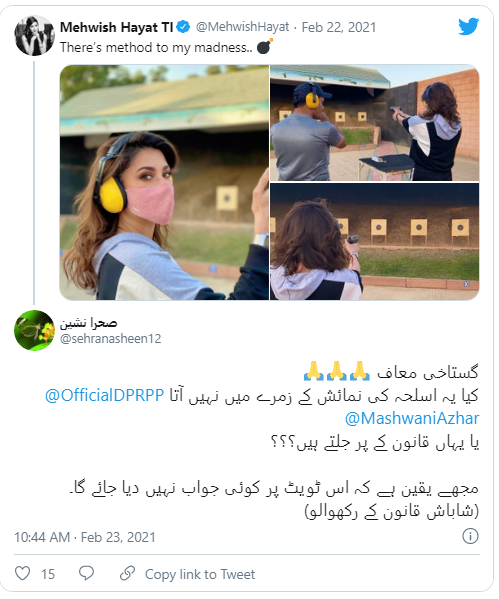 Photos shared by Mahesh Hayat show her firing a pistol in the presence of an instructor.

These photos of Mehwish Hayat continue to face criticism by internet users on her social media accounts in the comments section.

Fans say that new pictures of the supermodel fall into the category of displaying weapons on social media which should at least have a trigger warning or be censored.

Mehwish Hayat Has A Unique Method Of Handling Her Madness

Beware! Mehwish Hayat is taking gun shooting lessons to handle her own...