The Weeknd will definitely have one of his biggest weeks in Rolling Stone Charts history after his Super Bowl Halftime performance resulted in three times the growth in sales.

The Weeknd rose from number 8 to number 2 on the Daily Top Artists Chart, and it has been his highest placement ever since the release of ‘After Hours’ in March last year.

Abel performed his greatest hits at Sunday night’s show, from ‘The Hills’ to ‘Blinding Lights’.

He currently has five albums on the daily RS 200 and if it they remain at the same position, they will beat his personal best of four simultaneous entries on the chart.

His ‘After Hours’ album is currently listed as fourth, while his 2015 album ‘Beauty Behind the Madness’ rose 45 spots up, making it to Number 16. ‘Starboy’ leaps from number 71 to number 23. His new compilation album, ‘The Highlights’ is currently ranked at 79, while his 2012 compilation ‘Trilogy’ is at number 107. 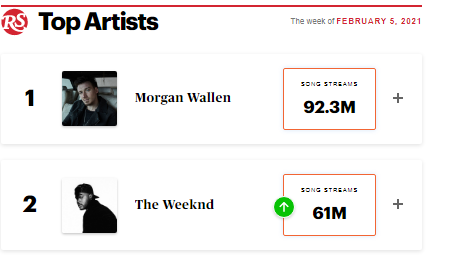 There was an increase of 68.5 percent in on-demand audio streams on Monday to 23 million. The digital album sales mounted 186 percent after the weekend, on Sunday and Monday. His song sales increased five-fold compared to the past two days.

His old songs from ‘Mixtape’, “House of Balloons”/”Glass Table Girls” and “”Earned It” also saw big increases of 300 percent and 113 percent, respectively.

Weeknd took the Internet by storm with his Super Bowl performance

The Weeknd enthralled audiences with his explosive performance at the Super Bowl...