Leading Pakistani actor and host Yasir Hussain has shared his new photos on social media in which he is wearing a black shalwar kameez.

The actor is well known for his unique views and controversial statements. Despite being a controversial figure in the Pakistan showbiz industry, Yasir Hussain has a huge fan following on social media.

Television celebrities Hira Mani and Yasir Hussain team up to set the...

Yasir Hussain shared two photos to his Instagram account in which he is dressed in an all-black outfit with a shawl wrapped around.

This post is getting a lot of likes and loving comments from his fans.

Commenting on this post of Yasir Hussain, one of his fans asked ‘dance ni kita’, to which Yasir replied saying he didn’t get a chance to dance. 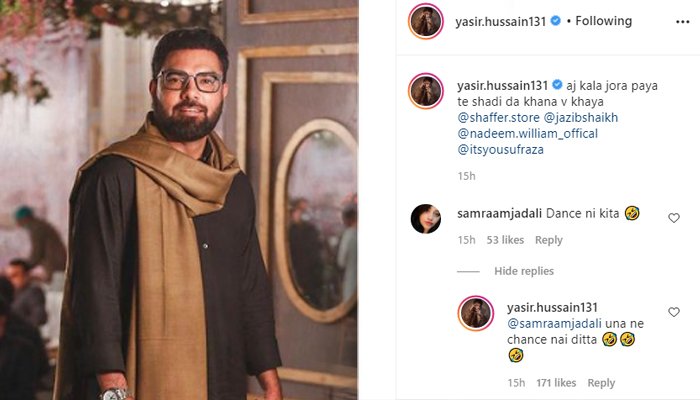 Some followers said that Yasir Hussain is pulling off the black shalwar kameez well.

I have no issues with the Turkish series ‘Ertugrul Ghazi’, Yasir Hussain

‘I haven't fallen in love with anyone yet’: says Neelum Muneer

KARACHI: Bank Alfalah, Pakistan’s premier financial institution, is at the forefront of digitalising...

Alyzeh Gabol is a Pakistani supermodel who is now also working as...

Pakistan Is Way Too Important for US To Overlook, Mooed