Zahid Ahmed all smiles with his sons in an adorable picture

One of the dashing personalities of Pakistani showbiz, Zahid Ahmed has proved himself in the industry with his tremendous acting skills and performances.

He took to Instagram recently and posed with his adorable sons with a beautiful caption.

“Of all the roles Allah has blessed me with, being a father is the best one! Alhamdolilah,” he wrote.

He took to his Instagram story and to praise his co-star Sonya Hussyn for her stellar acting performance and called her a true champion of the arts. 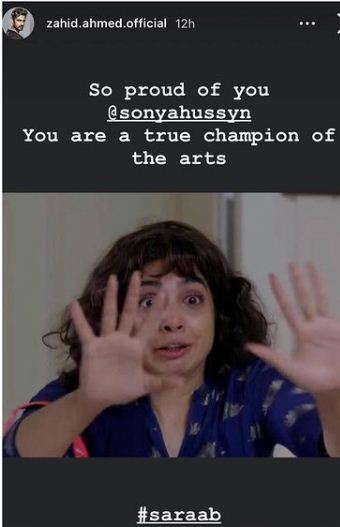 Moreover, Zahid Ahmed’s wife Amna Zahid had written a congratulatory note for him on Instagram.

Amna had shared a picture of her husband holding his award, with a lengthy caption.

“Our journey has been quite eventful, to say the least,” she wrote, adding, “Some loss, some pain but extraordinary learning – some poor and lonely times but lots of amazing friends and a rewarding career – All in All to make our faith stronger in the divine force.”

She went on to thank Allah for Zahid’s achievements in his career as well as his life, adding that they have been lucky to find “ease in our hardships.”

Zahid Ahmed has a special message for fans on his birthday

One of the dashing personalities of Pakistani showbiz, Zahid Ahmed has proved...

Who did Imran Ashraf declare ‘Queen’?

Imran Ashraf, a well-known actor in the Pakistani drama industry, has declared...

Aisha Khan feels singled out in the latest photo she shared

American actor and producer Mark Ruffalo has made it to the list...

Chinese film director Chloe Zhao made history a she became the first...