Ali Zafar has a witty response to a fan’s marriage proposal; Check it out!

Pakistan’s singing sensation Ali Zafar is a pro when it comes to singing but he has quite a humorous personality as well.

Recently, Ali Zafar took to Twitter to spend his Sunday with fans as he began a Q&A session which turned out to be interesting as a female fan asked him to marry her. 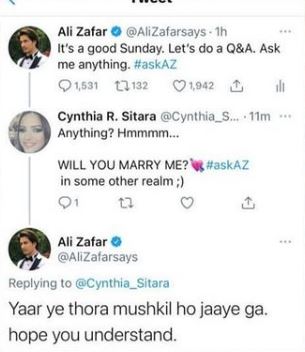 Earlier, Ali Zafar had shared a painting he created of his mother-in-law and shared it with his Twitter family.

Along with the acrylics on canvas, Ali Zafar wrote, “My mother in law. Acrylics on Canvas. Always loved acrylics as they are much faster to paint with.”

The fans were quick to respond to the Jhoom Jhoom singer’s painting skills. They posted mixed reactions over their mother-in-laws’ as well.

Korean tech giant Samsung has reclaimed the top position in the smartphone...