Ayeza Khan, one of the most loved celebrities of the Pakistan drama industry shared a photo with Turkish actress Gülsim Ali on her social media accounts.

Gulsim Ali garnered fame in Pakistan after she played the role of Aslihan Hatun in the iconic series Dirilis: Ertugrul. For those who are watching the series on state television, she appears in season 3 as a representative of the Cavdar tribe and will also be appearing in season 4 as the wife of Turgut Bey.

Taking to Instagram, Ayeza Khan shared a photo in which both the actresses can be seen wearing eastern traditional attires and are looking beautiful.

Gülsim Ali commented on the post wishing to see her ‘sister’ soon. 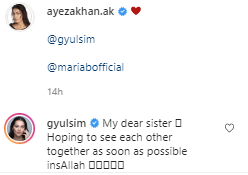 Which actor will Ayeza Khan be casted alongside next?

Bollywood filmmaker Hansal Mehta is one of the few Bollywood celebrities to...

Akshay Kumar’s Bell Bottom, which was earlier scheduled to release on July...

From our favorite potato fries and chips to tomato sauce, corn flakes,...