The ‘Pawri’ trend fever, for some, is a center of attraction and quite playful, whereas on the other hand, it has become quite frustrating for many netizens and even celebrities.

Seems like actress Mahira Khan has similar frustration as she hinted of being ‘annoying’ via her Instagram story. She shared a viral meme based on DC Comics characters Batman and Robin, showing batman ‘slapping’ Robin on his face.

Similarly, the meme referred to those mumming the viral ‘Pawri Horai Hai’ lines and the other person slapping them.

The meme also has lines written on it. As Robin saying ‘Ye Mein Hoon’ (This is Me) and Batman slapping him saying ‘Chup’ (Shut Your Mouth) to stop him at once. 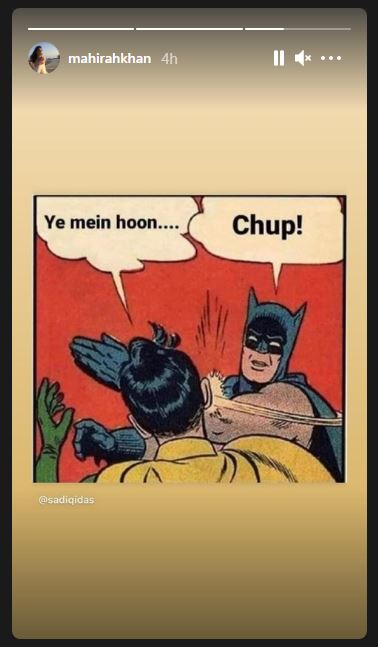 It is quite sure that Mahira Khan is completely fed up from this Pawri trend and wants it to stop.

It is pertinent to mention here that Instagram influencer Dananeer Mobeen had become an overnight social media sensation after her #PawriHoraiHai video went viral all over the world.

The girl in the video said it’s me, it’s my car and, they are my friends and they are doing a party. The girl’s speaking style, fake English accent, and the tone was such that the video was funny to the users while it went viral in a few hours.

Many people have so far recreated the video with their friends by copying the video and adopted the accent like her.

Furthermore, the popularity of the video reached cross-border earlier when popular Indian music producer and content creator Yashraj Mukhate mixed his musical touch to it. His music video became a massive hit.

The viral #PawriHoRahiHai video has received a crazy response from netizens and...

Earlier, Mahira Khan had also recreated the video with her friends and fellow celebrity Momal Sheikh.

She had danced on the ‘Pawri Horai Hai’ song track made by Indian composer Yashraj Mukhate.

Video: Here is how bride and groom do ‘pawri’

#Pawrihorihai has taken the social media by storm. Every other person can...

Royal family members have been sharing memories of the late Prince Philip....

Royal family members have been sharing memories of the late Prince Philip....