Minal khan and beau face backlash for swimming together

A video of Minal Khan, the most popular actress in the Pakistani drama industry, and beau Ahsan Mohsin Ikram swimming together went viral on social media. Both media personalities have once again come under severe criticism.

Ahsan Mohsin shared a video on his Instagram account celebrating one year anniversary with Minal Khan. The two can be seen swimming in a pool in the video.

The actor closed the comment section of his post after sharing the video so that users could not criticize the couple.

Ahsan Mohsin Ikram has recently made their relationship official by putting a...

In other news, this video of Ahsan Mohsin and Minal Khan is being shared on various blogging pages on social media where users have thrown arrows of severe criticism at both of them.

One user commented on Ahsan and Minal’s viral video, saying that why do celebrities share such content on social media when they know that people will not digest such things. 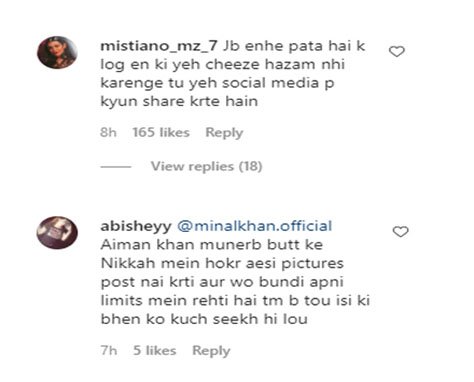 Another user criticized Minal and wrote that Aiman Muneeb does not share such pictures even though she is married but still maintains her boundaries. Netizens suggested that she should learn something from her sister.

Ahsan Mohsin had proposed to Minal Khan on Valentine’s Day last month. The duo often faces criticism on social media for the inappropriate pictures shared by them.

Minal Khan got into hot water after she shared the first photo...