In the photo he shared, HSY can be seen with General Qamar Javed Bajwa.

Hassan Sheheryar Yasin described the meeting with General Qamar Javed Bajwa as an honor for him and also wrote a beautiful emotional message for the Pakistani forces in the caption of the photo.

Hassan Sheheryar wrote, “It was a huge honor to get to meet Chief of the Army General Bajwa. My mammoos and chachas have all served with honor and dignity in the Pakistan Army, the Air force and the Pakistan Navy. I have seen first hand their dedication and commitment and their willing to put their lives in danger to protect and safeguard our Country.”

HSY added, “I have always held the armed forces in the highest regard and was humbled to have met Gen Bajwa at the Pride of Pakistan Pavilion.”

The designer further said that his meeting with General Qamar Javed Bajwa was a beautiful meeting and that it is a great honor for him to meet the COAS at the Pride of Pakistan Pavilion. 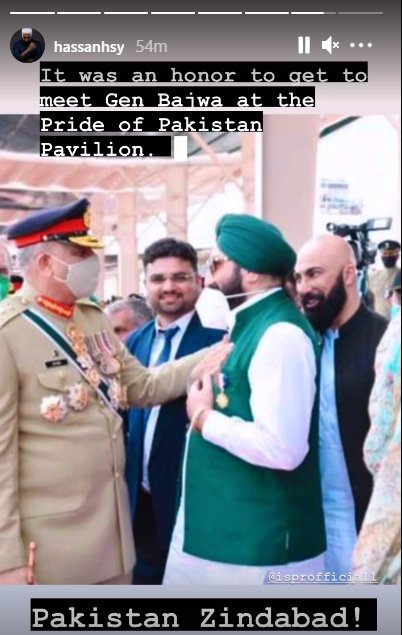 HSY also wrote the slogan ‘Long live Pakistan’ at the end of the caption.