Singer Falak Shabir says, “Exams For 2021 Will Surely Be Cancelled”

Singer Falak Shabir, who is the husband of showbiz actress Sarah Khan, has a piece of exciting news for all the students.

As students from around the country are demanding the cancellation of board exams 2021 amidst the ongoing deadly COVID-19 outbreak.

However, Falak Shabir took to his Twitter and said that this year’s exams will be cancelled soon.

#2021 Exams will be cancelled soon #ExamsCancelKaro

Later, in his Instagram story, the singer assured that this is going to happen by saying: “Mark my words.” 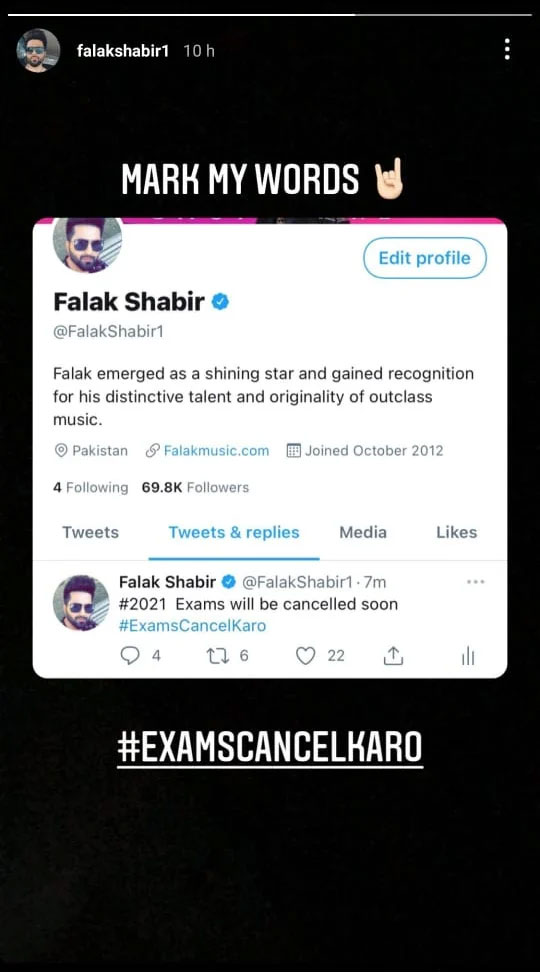 This announcement came after the Islamabad High Court (IHC) has dismissed a petition demanding the suspension of in-person A and O level exams as non-maintainable.Chief Justice Athar Minallah announced the decision after hearing the petitioners’ lawyer’s arguments.

The court directed the petitioners to go to the National Command and Operation Centre (NCOC) to get their complaint heard.

“This court has already held that the decisions of the National Command and Operation Centre are binding and not justiciable by a judicial forum,” read the four-page long verdict.

“The grievance raised by the petitioners relates to the policy of the Federal Government in the context of dealing with the crisis of Covid-19. This court, therefore, is not the competent forum nor has the expertise to direct the respondents regarding what mode should be adopted relating to the assessment of students.”

According to Minister for Education Shafqat Mehmood, all Cambridge exams will proceed as per schedule as AS and A-Level exams will begin on April 26 and O Level and IGCSE exams on May 10.

On the other hand, Matriculation and Intermediate board exams have been deferred and will take place in late May.

A, AS, O level and IGCSE exams will be held as per the date sheet announced by CAIES, announced Shafqat Mahmood via his Twitter handle on Sunday.

He also announced that there will be no cancellation or delay in the exams.

Asim Azhar took to his Twitter and questioned the minister who will take responsibility if these students take COVID to their homes.

He wrote, “Who will be responsible if kids take covid back to their homes just so they could appear in exams?

Who will be responsible if kids take covid back to their homes just so they could appear in exams? @Shafqat_Mahmood sir?

Why Pakistani Students Want Cambridge 2021 Exams To Be Canceled?

As the third wave of coronavirus has caught Pakistan, the O/A-Level students...