Father of famed model Hasnain Lehri has passed away on Saturday (today).

Fellow celebrities and family members pay condolences to Hasnain Lehri after the sad demise of his father. The model took to his Instagram to inform this news. 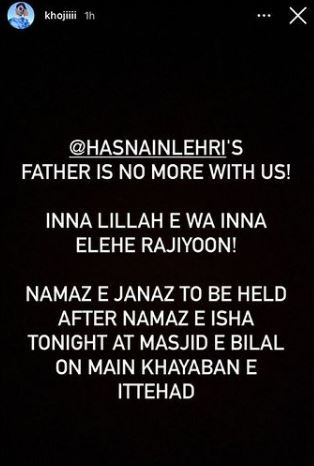 Earlier in 2019, Hasnain Lehri has lost his younger brother.

Previously, supermodel Sabeeka Imam and Lehri had called off their relationship and announced the news publicly.

Sabeeka Imam took to her Instagram and wrote, “And so this journey officially comes to an end. It has been a long time since we both realized that our paths are destined to be separate. After multiple attempts and much consideration, we have called it quits.” Imam also revealed her reason for making a post about her breakup which was because she was tired of all the constant assumptions relating to her relationship status.

She had also mentioned that the decision to call it quits was mutual keeping in view their “irreconcilable differences.”

“There was a proposal but unfortunately it did not materialise due to irreconcilable differences,” the model continued.