The news of parents being fined if they delayed the marriage of their 18-year-olds and above-brought storm all over social media after MMA member Sindh Assembly Syed Abdul Rashid has submitted the draft law to the Assembly Secretariat.

To which, Usman Mukhtar shared the news on his Instagram story and wrote, “This has to be a joke.” 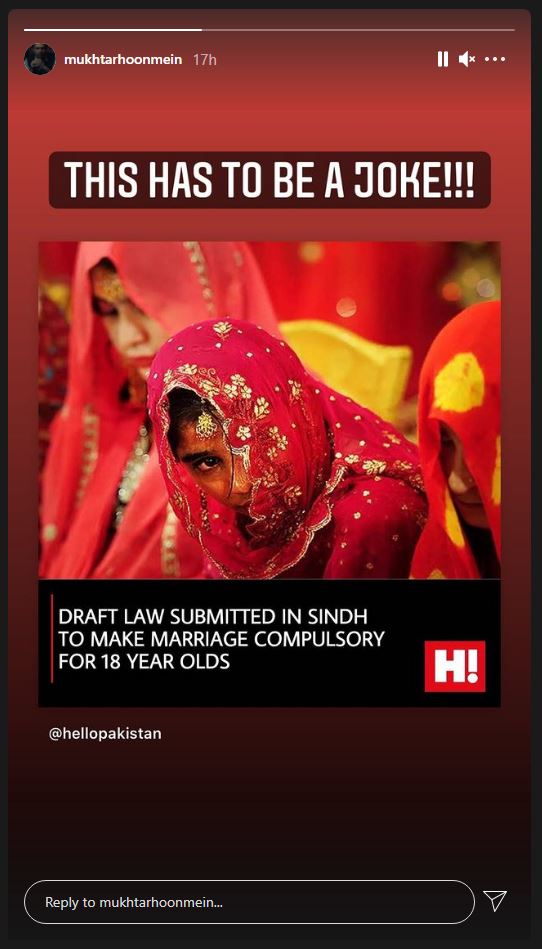 The submitted bill says that if parents are unable to comply, they will have to provide a “justified reason of delay”. If they fail to report to the Deputy Commissioner, they will be fined Rs500.

This viral news has taken the internet by storm with rib-tickling memes flooded the news feed.

Note that on Wednesday, MMA member Sindh Assembly Syed Abdul Rashid has submitted a two-page bill to the Sindh Assembly calling for making the marriage of 18-year-olds compulsory in Sindh.

The bill, dubbed the Sindh Compulsory Marriage Act 2021, calls on the Sindh government to ensure that parents marry their children up to the age of 18 and if parents delayed the marriage, they have to inform the Deputy Commissioner in writing with solid reasons.

If the parents cannot give a good reason for the delay, they will be fined. Clause 3 of the bill states that the fines should be deposited in the official bank account of the Deputy Commissioner’s Office. The bill calls on the provincial government to ensure the implementation of the bill.

He was being mocked because whenever an actress appears with him on the screen, she gets married.

However, after the co-incidences, Usman Mukhtar was heavily trolled as the netizens began to call him a perfect ‘Rishta aunty’ and whenever someone appears with him they get lucky.

Though many people assume that psychological stress causes grey hair to appear...