Leading Pakistani actress Hania Aamir has once again come under fire from fans after sharing her new Vlog.

The actress recently shared a video blog on her YouTube channel in which she can be seen going for a nose piercing while her friend who accompanied her opted for an ear piercing.

During the nose piercing, the actress cried out in agony while her male friend was seen laughing at her.

One user criticized the actress’ over-reaction to the pain and wrote that it doesn’t hurt as much, and that it just feels like a small needle pinch. 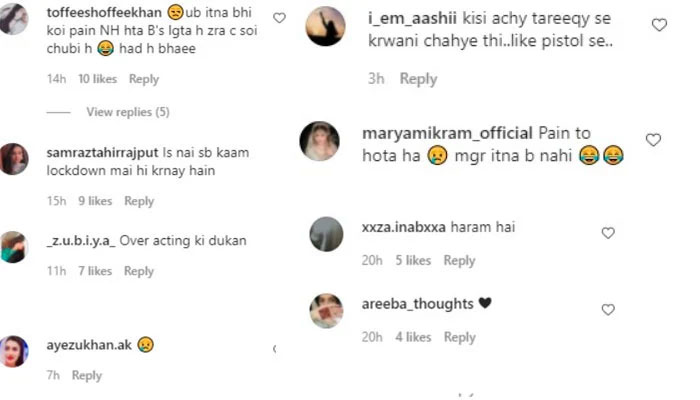 Users criticized the actress for wanting to do such activities particularly during lockdown.

A user named Zubia commented saying, ‘over acting ki dukaan’ while another user said the way the actress’s nose was pierced was wrong and that better equipment like an ear piercing gun should be used.

The actress has been victim of many controversies before. Earlier, the ‘Dimple Girl’ Hania Aamir appealed on social media for the implementation of SOPs to prevent the spread of the global epidemic Covid-19, for which she faced a lot of criticism.

The actress shared a photo of herself to her Instagram account in which she can be seen standing outdoors.

While this post received thousands of likes from her fans, some internet users have also criticized this appeal of the actress in the comments section.

Fans and followers said that the actress herself is outdoors and telling us everyone stay at home which makes her statement contradictory.