Aiman Khan and Minal Khan’s mother Uzma Mubeen, whose daughters have shown the true essence of acting in many Pakistani super hit dramas, has posted an emotional message on her social media account for her late husband, Mubeen Khan.

Uzma Mubeen shared a photo of her wedding photo frame to her Instagram account in which she can be seen dressed up as a bride and her late husband as the groom.

Commenting on her mother’s emotional post, Minal Khan wrote, “Sab se zyada hai, sarey jahan ki khushi mila kr bh gham zyada hai” which translates to ‘Even if all the joys of the world are combined, the grief of Baba’s departure is greater’. 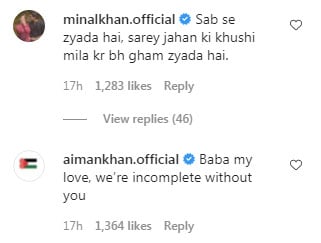 It should be noted that Minal Khan and Aiman Khan’s father Mubeen Khan passed away on the last day of 2020, on December 31 after struggling with major health issues.