Leading actress of the Pakistani showbiz industry Nausheen Shah was criticized by netizens for copying the style of the Palestinian-American model Bella Hadid.

Nausheen Shah recently shared some of her photos on the social networking site Instagram in which she donned a unique styled dress paired with a duster coat.

In the photos shared on Instagram, Nausheen Shah and a few of her friends can be seen in these photos at an event.

While her fans praised her style on the actress’s post, critics also fired arrows of criticism.

A user commented on the actress’s post and wrote, “You have tried to copy Bella Hadid.”

In response to the user’s comment, Nausheen Shah asked, “Who is Bella Hadid?”

Another user humorously wrote, “MashaAllah! You look like our goat. ‘ 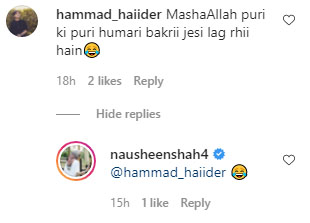 In response to the critic, Nausheen Shah commented with a laughing emoji.

It should be noted that most Pakistani actresses, including Nausheen Shah, are often criticized on social media for their dress and style.

Some actresses avoid responding to critics, while many actresses are very vocal and actively respond to backlash.

Alizeh Shah, who is under fire these days, has had enough of...

Prime Minister Imran Khan will perform the groundbreaking of the Karachi Circular...