Emerging actress of the Pakistani showbiz industry Aymen Saleem, who had gained immense appreciation and love within a short span of time, announces her decision to quit acting.

Taking to her Instagram, Aymen, the Chupke Chupke star said that she will no longer be acting but that she’ll stay connected with the industry regardless. 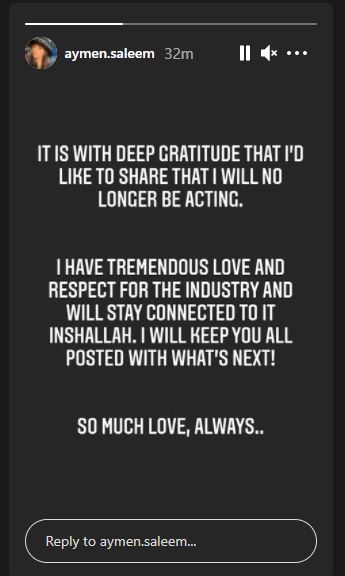 Who is Aymen Saleem?

In 2010, Aymen Saleem broke the world record of the most number of girls fitting into a smart car the maximum time.

She, along with her other A’levels friends had broken the world record set by an Australian team in which 18 girls sat in a smart car for 5 secs.

However, 19 Pakistani girls, including Nazia Hassan’s niece managed to sit in a smart car for 19 seconds, making their name into the Guinness Book of World Records.

It should be mentioned here that actress Aymen Saleem is also a model and young ambassador of the Pakistan Youth Parliament. Besides, the actress is also the niece of popular singer and Queen of Pop singer Nazia Hassan.

According to media reports, the actress has a younger brother while her mother is a housewife.

Moreover, the actress has a younger brother while her mother is a housewife.

It should be noted that former cricketer Saleem Yousuf is considered one of the famous wicketkeeper-batsmen of Pakistan in the ’80s.

As the AJK elections are coming near, the political activities are increasing...