Pakistani showbiz actress Ghana Ali, who had tied the knot with a millionaire Umair Gulzar, has savagely responded to trolls body-shaming her husband.

Ghana Ali has shared new pictures with her hubby on Instagram and the keyboard warriors began to bash and comment over the actress’ choice over her husband’s physical appearance.

However, she knows how to deal with such comments as she replied to the naysayers with befitting comments. 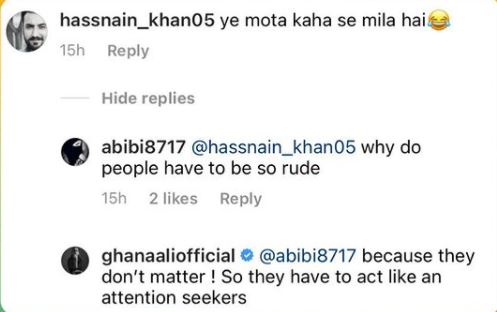 During the Nikkah function, Ghana had opted to wear a stunning pastel gray dress with delicate jewellery to compliment her look. She chose a simple makeup look. Meanwhile, her husband donned a simple charcoal grey shalwar kameez.

On the other hand, Ghana Ali’s husband already has a wife and a 4-year-old son, sources said.

Previously, when the actress had shared photos with her husband Umair Gulzar on social media, netizens criticized her and her husband and he was called an ‘uncle’ by the users.

After this the actress expressed her anger at a user who was making fun of her husband’s appearance, requesting people to not say anything regarding her husband.