Leading Pakistani host and actress Sanam Jung has called on the government to set an example by punishing the perpetrators of heinous crimes in the wake of the abduction and murder of a girl in Korangi area of ​​Karachi.

Actress Sanam Jung has condemned the killing of a girl who was killed after being abducted and raped in Korangi on her Instagram story. 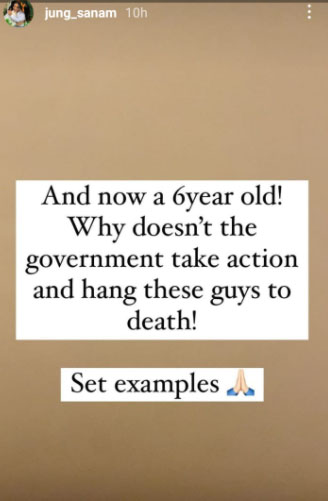 “And now a 6-year-old girl,” she wrote in her Instagram story.

Sanam Jung questioned the government’s actions and wrote, “Why doesn’t the government take action and hang these guys (criminals) to death!”

She called on the government to “set an example” by punishing the perpetrators of such crimes.

It may be recalled that the body of a minor girl who went missing in Korangi Zaman Town yesterday was recovered from the garbage.

DIG East Saqib Ismail Memon visited the affected area and got information from there.

Investigators said the girl was playing outside the house the night before when the light went out and her father left her playing in the street.

According to officials, when the girl did not return for a long time, the family started searching and the police station was also informed late at night.

Investigators said the tortured body of the girl was found wrapped at around 6am.

He mentioned that there was a deserted school and ground where the body was found, where drug addicts used to gather in the ground.