Famed social media activist Shaniera Akram doesn’t think unsafe driving and defying traffic rules is cute, especially when it’s done by celebrity couples such as Minal Khan as her recent video goes viral in which she was singing a song to her fiancé during the drive.

Shaniera Akram took to her Instagram and schools Minal Khan for not wearing a seatbelt as she has millions to have her irresponsible impact on.

“Come on guys, you’re famous and have millions of followers. Is it too hard to be a little bit more responsible?”

“Put your seatbelt and eyes on the road,” added Akram. 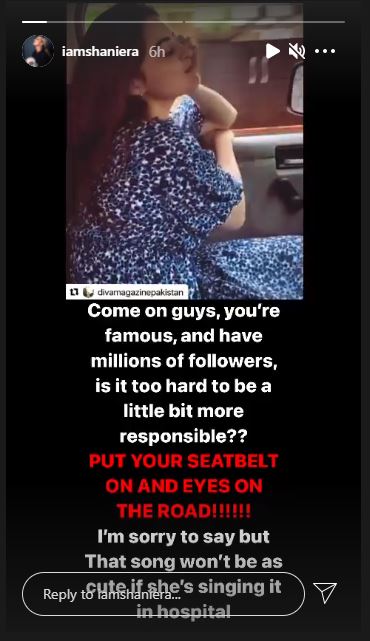 Earlier, power couple Minal and Ahsan were spotted at a hospital as the actor shared a picture with her wife-to-be on Instagram, wishing her a speedy recovery.

Minal Khan and Ahsan Mohsin Ikram made their bond more official and strong as they exchanged rings in a star-studded ceremony.

They took to social media to announce the happy news with fans and followers. They also shared some gorgeous photos from their engagement ceremony.

What did Shaniera Akram stir up for Wasim Akram’s birthday?