Throughout the situation, Shilpa Shetty was silent and her social media account was inactive. However, the actress has now shared a quote written by James Thurber.

A note shared in English by Shilpa Shetty reads, “Do not look back in anger, or forward in fear, but around in awareness.” 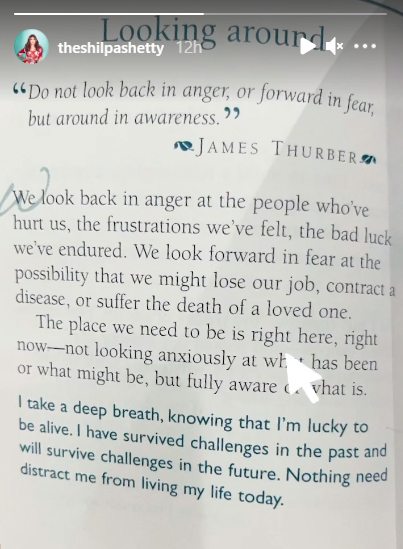 The note further reads that we live in the present and think about the present, so we should not worry about what happened or what may happen next, but be fully aware of the current situation.

The statement additionally reads, “I take a deep breath, knowing that I’m lucky to be alive. I have survived challenges in the past and will survive challenges in the future. Nothing need distract me from living my life today”

Raj Kundra arrested on grounds of making an immoral film