Leading actress of the Pakistan film and TV industry Sonya Hussyn Bukharee has set a date for her marriage, announcing via her social media that she will get married in early 2023.

She held a question and answer session on the social media site Instagram, in which her fans asked her questions about her marriage and her future husband. 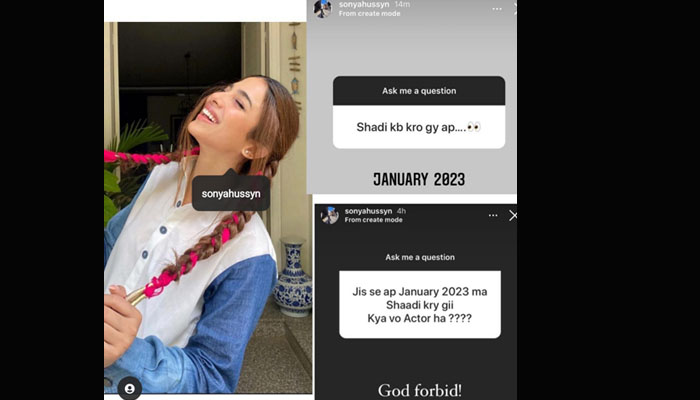 The actress said that she will get married in January 2023.

A user asked the actress if the person she will marry in 2023 is also an actor.

In response to this question, the actress simply wrote, “God forbid.”

The actress recently celebrated her birthday on the 15th of July and she celebrated her special day surrounded by her fellow stars and family. Wishes poured in for the actress and she was showered with love by her friends and fans.

Celebrating her birthday zealously, the gorgeous Sonya Hussyn turning to her Instagram handle, shared beautiful photos of her birthday.

In the pictures shared, Sonya is seen surrounded by balloons and cupcakes. She is seen sitting in the middle with a cupcake in her hand, all set to blow the candle and cut her birthday cake. The ‘Saraab’ star captioned the picture as, “Birthday filled with dher sara love.”

Earlier, Sonya Hussyn was under criticism by the Academy Award Winner Sharmeen Obaid for scrutinizing Mahira Khan’s choice by starring in the Bollywood film Raees.

Hussyn’s remarks did not sit well with filmmaker Sharmeen Obaid Chinoy who slammed Sonya for her comments.

Actress Sonya Hussyn has been criticized by fans for dressing up on...

ISLAMABAD: The Supreme Court of Pakistan on Monday declared all the petitions...

Ramiz wants to explore player auctions instead of draft for PSL

The Pakistan Cricket Board (PCB) chairman Ramiz Raja wants to try the...