Pakistan’s emerging actress Minal Khan has reacted to the recent Minar-e-Pakistan incident and asked the government to take strict actions against those 400 miscreants involved.

Minal Khan took to her Instagram story and said that “the country fails to protect their own citizens from men like Yazeeds“.

“The country mourns for the martyrs of Karbala today, however it failed to protect their own citizen from 400 yazeeds”, she wrote. 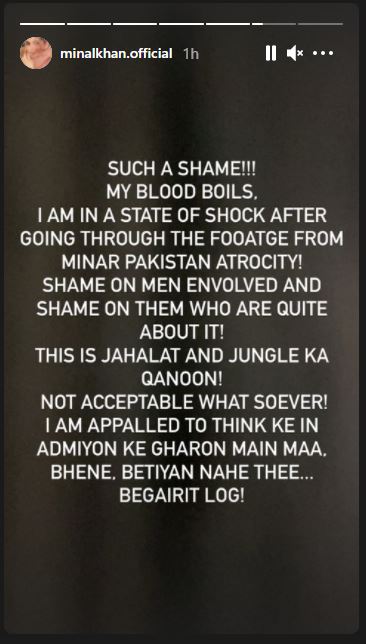 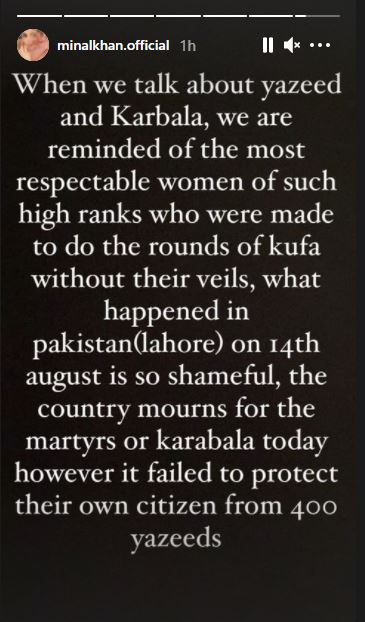 The heinous and animalistic incident at Minar-e-Pakistan, Lahore after a huge crowd of around 300 to 400 men assaulted a female TikToker on Independence Day.

The first information report (FIR) was registered at the Lorry Adda police station on the TikTok star’s complaint after hundreds of unidentified persons assaulted her at Minar-e-Pakistan.

In her complaint, the Tiktoker stated that she was filming a video on 14th August along with her friends when 300 to 400 people attacked them. She said the crowd surrounded them, pushing and shoving. They also tried to tear her clothes, she added.

However, actors including Mahira Khan, Farhan Saeed, Agha Ali, Ahmed Ali Butt and many others strongly rebuked the barbaric act as the disturbing videos and images from the incident began to circulate all over social media.

On the other hand, the female TikToker Ayesha, who was subjected to molestation by 400 men at Minar-e-Pakistan, has demanded justice from Prime Minister Imran Khan and appealed to punish those miscreants.

In an interview with local media, victim Ayesha opened up about the details and told that the huge crowd of men assaulted her for around three hours at Minar-e-Pakistan.

“I did not wear any obscene or revealing dress, nor I tried to be vulgar there,” she said.

The victim also told that she and her friends tried to reach out to the police but did not get any response as the crowd was huge and they couldn’t get out of that place.

Prime Minister Imran Khan took notice of the Minar-e-Pakistan incident and ordered the immediate arrest of those who molested the woman.

According to details, Prime Minister Imran Khan took notice of the incident and contacted IG Punjab.

PTI leader Zulfi Bukhari wrote in a Tweet that Prime Minister Imran Khan personally spoke to IG Punjab, police is catching all culprits involved in manhandling of female TikToker in Lahore & those damaging statue of Ranjit Singh at Lahore fort.

The female TikToker Ayesha, who was subjected to molestation by 400 men...