Janhvi Kapoor took to Instagram to wish Sara Ali Khan a happy birthday on her 26th birthday. The Dhadak actress posted a photo of herself with Sara and a note for her. Sara needed more abs, she desired.

Sara and Janhvi Kapoor work out together frequently. A workout video of the actresses had previously gone viral on social media.

Wishing Sara on her birthday, Janhvi wrote, “May this year be filled with memories, fulfiling creative journeys, great food, greater abs, and so so so much happiness, success and love. Keep spreading your extra special contagious energy that everybody loves you for (sic).” 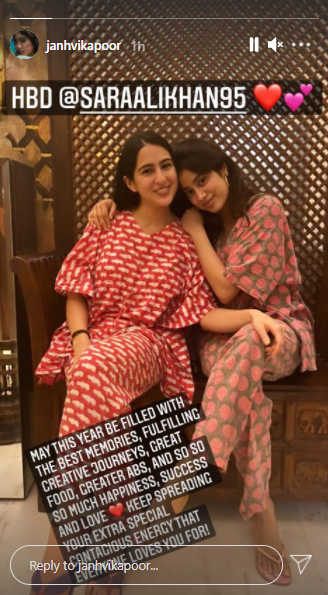 Sara and Janhvi had previously gone popular with a fitness video. The actresses are seen working out hard in brightly coloured gym bras and shorts in the video.

Sara shared the video and wrote, “Go with the flow. Steady and slow. Kick high- squat low. That’s how you’ll get the golden glow. For better instructions ask @namratapurohit to show (sic).”

Sara will next be seen in Aanand L Rai’s Atrangi Re, alongside Akshay Kumar and Dhanush. On August 6, 2021, the film will be released.