Justin Bieber, a lyricist, and singer has officially surpassed all of Spotify’s streaming records and has been named one of the site’s most popular artists.

For those unfamiliar, according to last month’s data, the musician has collected almost 83.3 million monthly listeners.

According to the Twitter account chart data “@justinbieber has smashed the all-time record for most monthly listeners among all artists in Spotify history,” (83.3 million). He is the number one artist of platforms” 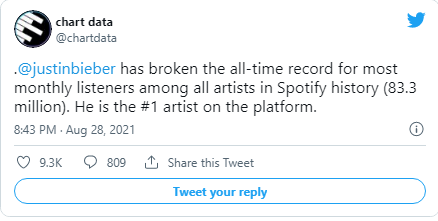 Justin Bieber's most recent news, photographs, and videos. After being recognized for...