Kareena Kapoor shared a photo of her newborn baby Jeh on Instagram Stories. While Jeh was laying next to her, the actor ate an avocado toast.

Kareena Kapoor has posted a new photo of her son Jeh on Instagram. The photo shows Jeh’s lower body along with the actress’ breakfast. The face of the baby is not yet revealed to the fans.

Kareena’s plate of avocado toast with cherry tomatoes was photographed and published on her Instagram Stories. Jeh is pictured relaxing next to it, wearing a onesie and holding a giraffe toy in one hand. Breakfast with Sophie the giraffe,” Kareena wrote with the photo. 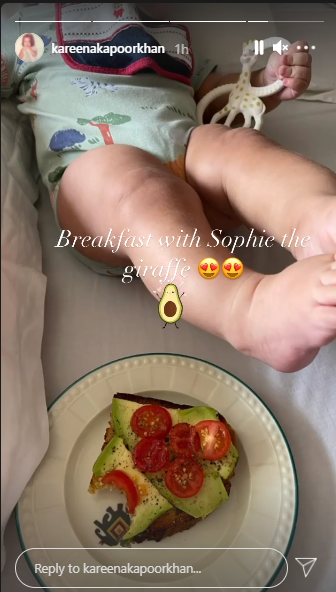 In February of this year, Kareena and her husband, Saif Ali Khan, had their second child, Jeh. Taimur, their four-year-old son, is also part of the family. Jehangir Ali Khan, Jeh’s full name, was revealed in Kareena Kapoor Khan’s Pregnancy Bible, her newly released book.

The family is being mocked on the internet after some people were offended by his name, which they claim is based on the Mughal emperor Jahangir.

She also talked about her two sons and the varied experiences she had during both pregnancies in the book. She mentioned in the book about how much more difficult it was to be pregnant with Jeh.

On the occasion of her late mother Sridevi's birth, actress Janhvi Kapoor...