Shehzad Roy took to Twitter to respond to a tweet from Bollywood actor Anupam Kher, who uploaded a video of young children utilizing tin cans and containers as musical instruments for their marching band.

This viral video was first shared by Roy, who had inquired about the children’s whereabouts after viewing their talent. He’d said on Instagram, “Please tell me where these kids are and I’ll provide them all the instruments they need.”

At the singer’s request, Roy’s followers confirmed that these children were from Hunza in Pakistan. Later, the same video was re-shared by Bollywood actor Anupam Kher on Twitter. “Some kids in a village in India have formed their own band together,” the actor wrote while sharing the video. “This band does not have any modern equipment. And what a tune they have chosen of the military band. Because they know that ‘the real power lies in the heart!’ Hail to these children.”

Many users replied to Kher’s tweet to correct his misconception as Roy did. He corrected him in a humble way.

“Thanks for sharing the video I shared a few days back. You say that these talented kids are from Bharat, a humble correction, these kids are in fact from Hunza, Pakistan. I am in touch with them and have sent them all the musical instruments they need,” Roy wrote. 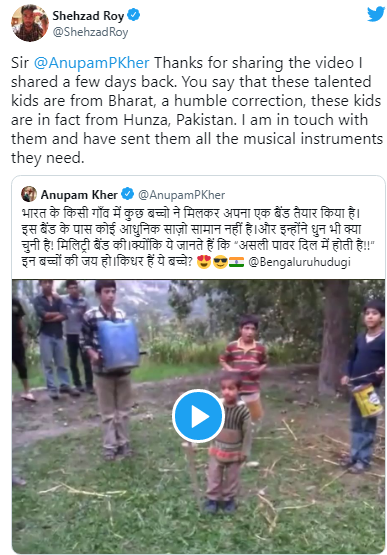 Netizens were glad to see Roy put the matter to rest, and many expressed their gratitude for his kind donation to the youngsters. We were also pleased to see how respectfully he replied to Kher.

Famed singer and social worker Shehzad Roy recently got involved in a...