Sara Ali Khan’s friends have shared photos from her birthday party on Wednesday night on social media. The photos and videos showed the gang enjoying a great time together as Sara celebrated her 26th birthday. 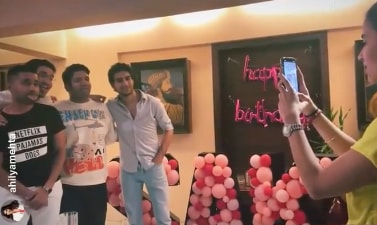 Sara’s friends shared photos of a balloon arrangement including her initials, a group shot, and a drinks bar with a couple of club sodas on one side.

Sara made her acting debut in Kedarnath in 2018, opposite the late Sushant Singh Rajput. She followed it up with three films helmed by big-name directors that received mixed reviews: Rohit Shetty’s Simmba, Imtiaz Ali’s Jab We Met, and David Dhawan’s Coolie No 1.

Up next, she’ll be seen in Atrangi Re, directed by Aanand L Rai and co-starring Akshay Kumar and Dhanush.