Power couple actors Ali Ansari and Saboor Aly, who recently exchanged rings in an intimate ceremony, are receiving much love from their fans as they make a cute and strong bond together.

Apart from having energetic chemistry, Ansari is Saboor’s official photographer for life now as he does the duty very well.

Recently, the Fitrat star shared an elegant picture of herself wearing a white shirt and keeping her locks tied in a bun.

“My hairstyle is called I TRIED,” she captioned the post. But what caught the public’s attention was her betrothed’s comment.

“That’s such a cute picture, I wonder who took it,” wrote Ansari and he also gushed over Saboor’s timeless beauty. 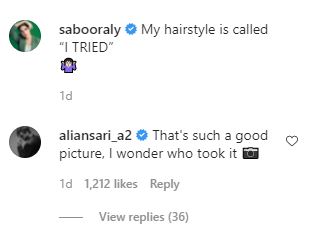 Recently, NASA uploaded a photo taken by its Hubble Telescope, capturing a...