The fresh face of the Pakistani showbiz industry, Areeba Habib worked as a model for international and local brands as well as in few popular drama serials.

Areeba Habib, in her recent clicks from Minal Khan’s Mayun function, looks timelessly beautiful as she donned a stunning attire with a touch of traditional Mayun colours and left fans gushing over her elegance.

The Jalan actress enhanced the beauty of her dress by complimented it with an emerald green clutch and wore subtle makeup with stunning heavy earrings.

In another picture from the event, Areeba Habib was seen alongside Minal, Ahsan and model Amna Ilyas, feeding the bride-to-be Shaadi ka laddu.

The stars were seen all smiling as they gathered together to mark the extravagant function ahead of Minal and Ahsan’s wedding. 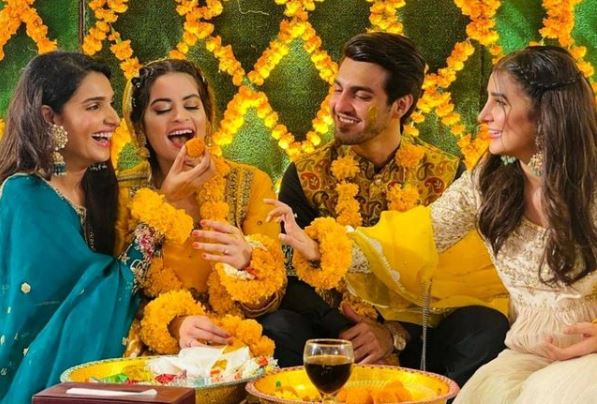 A star-studded Mayun event took place last night in an open space, with a number of fellow stars including Kinza Hashmi, Saboor Aly, Aamna Ilyas, Areeba Habib among others joined the function ahead of Minal and Ahsan’s big day.

Minal nailed the traditional mayun look with a yellow outfit, gold earrings and necklace, green bangles and gajras. While Ahsan was wearing a black kurta with a printed yellow waistcoat.

Back in August, the actress had shared a few photos from her engagement ceremony on Instagram. In the pictures, she can be seen with her close family rejoicing at her home.

Her fiancé Saadain Imran can also be spotted in the photos shared by Areeba Habib a couple of hours ago.

Moreover, Areeba Habib made her acting debut with the drama serial Koi Chand Rakh and later appeared in dramas including Qadam Qadam Ishq and Janbaaz.

Lastly, she worked in the drama serial Jalan alongside Minal Khan and Emmad Irfani.