Danish Taimoor, Ayeza Khan all smile as they meet Neha Kakkar and her hubby

Danish Taimoor, Ayeza Khan all smile as they meet Neha Kakkar and her hubby

Pakistan’s power couple Ayeza Khan and Danish Taimoor, who is currently in Dubai, recently met with acclaimed Bollywood singer Neha Kakkar and her husband Rohanpreet Singh, with pictures of their meeting being shared online.

Danish Taimoor took to his Instagram and shared an all-smiling selfie for his fans during his and Ayeza’s meetup with Neha Kakkar and her hubby.

A similar post was shared by the Meherposh actress on her Instagram handle and treated fans with a lovely selfie alongside famed Bollywood stars.

Also, Neha Kakkar penned a lovely comment and praised both Ayeza and Danish. “both! You’re both so beautiful,” she wrote. 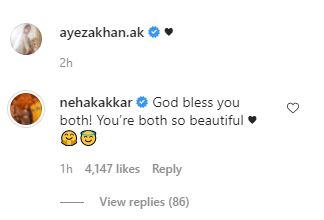 However, the fans were quick to respond as they were left delighted to see their favourite celebrities in one frame.

Earlier, Neha Kakkar and Rohanpreet, who tied the knot in the year 2020, shed light on how love blossomed between them.

Rohanpreet revealed that he first met Neha to shoot for their first music video, Nehu Da Vyah. “We literally met for the first time on the set of the song we did together – Nehu Ka Vyah and I didn’t even realise what she wrote for that song would come true one day. It literally changed my life for the best,” he said.

Neha realized that Rohanpreet was ‘the one’ not long after their first meeting. She was drawn to his good looks and polite behaviour. “My first impression of him was that he was so good to each and every person on the set. And undeniably, he was the cutest boy I had ever come across. The attraction was strong. I think it was really in those initial moments itself that I knew he was the one for me,” she said.

One of Pakistan’s most loved celebrity couples Ayeza Khan and Danish Taimoor tied...