“I did liposuction and I own it,” Mathira claps back at body shamers

“I did liposuction and I own it,” Mathira claps back at body shamers

Mathira Khan, one of the boldest celebrities, recently shut down shaming and trolling by responding if she had undergone plastic surgery or liposuction.

The celebrity has always been the main target on the internet about her body, her career and she has proven every time that when trolls try to shut her down Mathira rises above their cruel jokes and shaming.

In a recent interview, she was asked if she had anything to say to the trolls who kept insisting that she had undergone plastic surgery as well as gotten implants to look the way she does now. To which the model replied: “I have to say something, I know that a lot of people assume that I have done a lot of things to my body. Some will say surgery but also many people say it’s plastic, silicone, implants. It’s all natural don’t be jealous!”

However, the naysayers and keyboard warriors don’t miss any moment to bash the model. In the comment section, later, trolls tried to mock the mother of one by shaming her for altering her body parts with the help of plastic surgery.

She then proved to them that she is no longer allowing anyone to shame her for her life choices. Mathira responded back by saying that liposuction and lasers were not a crime and she would openly embrace them had she done them.

“Yes true I did liposuction I removed fat! You can talk to my doctors I didn’t and won’t get implants and if I do I will openly accept it I don’t have lip fillers and lasers I don’t shy away from the things I do I own them! I did liposuction (which is) not a crime because I was in bed rest for a long time after my accident I have punctured lung, 3 rib fractures. I was on the heavy medication you can Google my accident details (they are) not funny. Plus, I left my anti-depressants they put on a lot of weight and I have hormone issues! So yeah nothing to hide.” 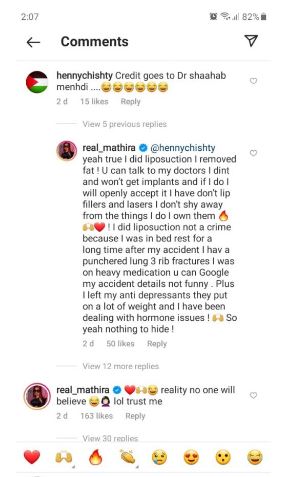 Mathira Calls Out “Grown Up” Men Texting Her To Adopt Them

Mathira Khan, one of the boldest celebrities, recently announced her desire to...