Acclaimed American actress Kristen Stewart, known for her androgynous fashion sense, turned heads when she stepped out to the Spencer world premiere at the 2021 Venice International Film Festival.

Kristen Stewart, who portrays Princess Diana in the biopic, looked like a dream in a pale seafoam layered look. The attire featured a longline tunic top with lace trim and a trailing black bow at the gathered waist. She paired it with coordinating trousers and stunning white pumps.

She complemented her entire look with subtle makeup, smokey eyes, nude lips and accessorised her outfit with a choker necklace.

The actress opted for her blonde tresses to fall in wavy curls. 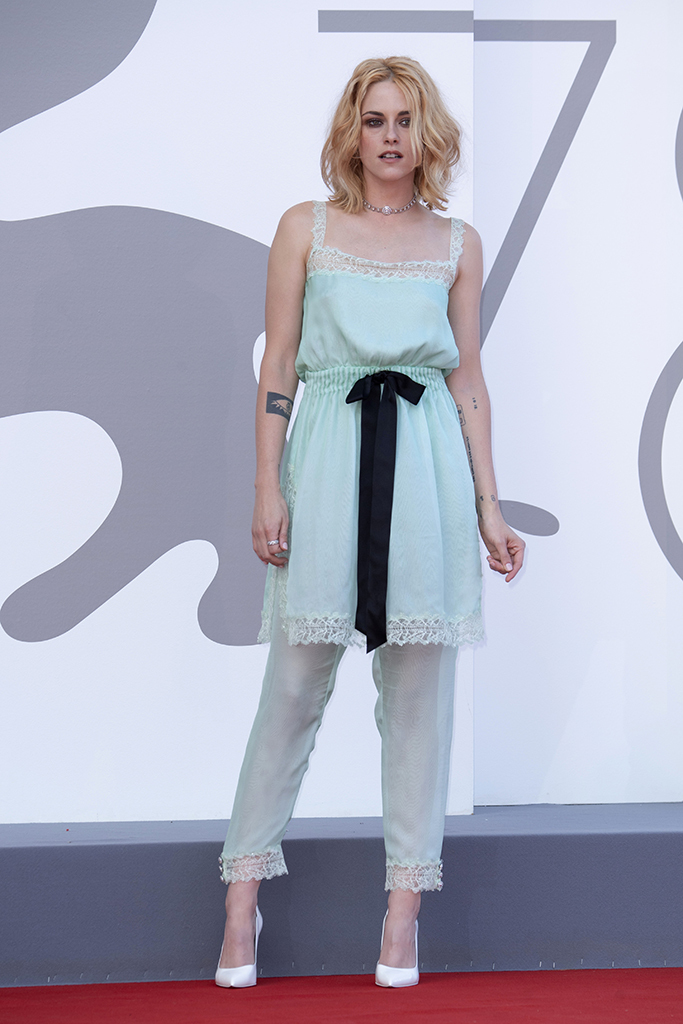 Moreover, speaking at a press conference, the Twilight star emphasized what she saw as Diana’s relatability, and the essential tragedy of her loneliness. “The really sad thing is that Diana, as normal and casual and disarming her air was, felt so isolated and lonely. She made everyone else feel accompanied, and bolstered by a beautiful light – and all she wanted was to have it back. It’s the idea of somebody being so desperate for connection, and able to make other people feel so good, feeling so bad on the inside.”

Saying she felt Diana was “born with … an undeniable penetrative energy”, Stewart added: “We haven’t had many of those people throughout history. Diana stands out as a just as a sparkly house on fire.”

Also, Stewart commented on Diana’s status as a fashion icon, saying the popularity of her style reflected the fact that she was so “touchable”.

“There’s a common thread in the fashion world that is about elevation, unattainability. Let’s give them a dream. But even when Diana looked at her most beautiful, you felt she could kick her shoes off, and walk outside and ask how you are. It’s hard to do that when you are teetering around on heels and looking like no one can come near you. It didn’t really matter what she wore. She knew how to use clothes as armour, but was so constantly available and visible. She wore her heart on her sleeve,” she added,

‘Spencer’: Kristen Stewart on Diana’s role, “It’s one of the saddest stories to exist ever”

Hollywood actress Kristen Stewart, who will play the role of Princess Diana...