Pakistani heartthrob Mahira Khan looked nothing short of a vision in an all-white t-shirt as she posed to treat fans with a sassy look.

The Raees actor took to Instagram and shared an endearing photo of herself looking chic donning an-all white t-shirt and paired it with black bottom.

The actress opted for nude lips to complete her look. Undoubtedly, she looked like a bomb. “I am the subject, I know best,” she captioned the post.

The photos have garnered thousands of hearts with no time. Even a few fellow stars couldn’t get over Mahira’s million-watt beauty. 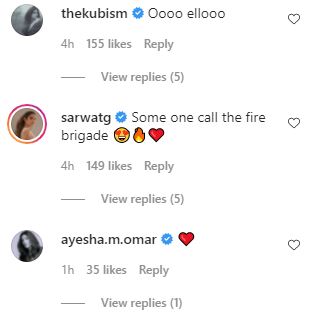 Earlier, Mahira Khan had touched on the misunderstandings people usually have about her, one of which is that she has undergone a nose job.

“Okay, you have got to zoom in to my nose. I have not gotten a nose job. If I had gotten a nose job, I would have been like… And Babar wouldn’t have to contour so much,” she referred to her makeup artist.

The Raees starlet then revealed that she has experienced body image issues just like any other woman. There are days when she feels depressed and anxious about her looks and body image.

“I struggle with a lot of other things. I struggle with anxiety, stress and sometimes, being myself. Like, I used to be able to laugh and talk and be funny, whatever my sense of humour was. And now everything, even a caption, is taken and blown out of proportion, so it kind of makes you cagey,” explained the actress.