A recent viral video of actor Muneeb Butt is doing rounds all over social media and has caused a stir among the audience.

During a chit-chat with host Nida Yasir and actress Amar Khan, Muneeb Butt jocularly shared his opinion that a woman should pamper and love her husband ‘out of fear’ that he might marry someone else.

The host asked them if they fear anything other than curses. The Kaisa Hai Naseeban star reversed the question and asked Nida to share her fear. To this, Nida Yasir said: “I’m afraid that my husband might get married for the second time.”

What irked the viewers was Butt’s reply over this after he said jokingly, “This fear is valid. Every woman should fear this, which is why they should pamper and love their husbands so that the thought of second marriage doesn’t appear in their minds.

However, after receiving the backlash from netizens, Muneeb issued a clarification via his Instagram, which he believes is being presented out of context by media publications.

“This is the clip that is misinterpreted by a few publications, this was not a serious conversation as seen we were joking and I sarcastically joked that you should be scared and pamper your husband even more. Picking a clip and using it in a different context to malign my character is not journalism. I do not think women should live under a constant fear that their husbands will leave them, said the actor.

He further expressed his love for his wife Aiman saying: “I am a husband myself and love my wife and she loves me, that’s the basic pillar of our relationship. I would request all the pages sharing these clips to do their basic fact checks then spread such negative content. Moreover, Nida Yasir was seen agreeing with Muneeb’s statement as she lashed out at the keyboard warriors for turning even the jokes into a controversy.

“Me ne bhi masti me bola that. Bato ko alag rung kyu dete he log.matlab ab masti mazak bhi na kare.jaan lenge kya hamari,” commented Yasir. [I myself said that in jest, why people take things differently, does it mean that we can’t even joke now?] 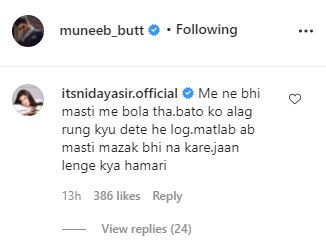 Adele says her son Angelo despised the song Skyfall during her pregnancy.

Adele joked that when she recorded her smash song Skyfall while pregnant...

Anushka Sharma's fans were greeted with a special post all the way...

My performance is inspired by Expo 2020 Dubai’s theme: Sami Yusuf

The wedding season is on the go and among other celebrity stars,...

Adele says her son Angelo despised the song Skyfall during her pregnancy.

Adele joked that when she recorded her smash song Skyfall while pregnant...