“Has to be my favorite interview of you so far, so so proud! MashAllah”, writes Naimal Khawar for husband

“Has to be my favorite interview of you so far, so so proud! MashAllah”, writes Naimal Khawar for husband

Former actress of Pakistan’s showbiz industry Naimal Khawar Khan has expressed pride in the views of her husband and actor and Hamza Ali Abbasi.

Took to her Instagram story, the gorgeous Naimal shared a short video taken from this interview and wrote, “Has to be my favorite interview of you so far, so so proud! MashAllah.” 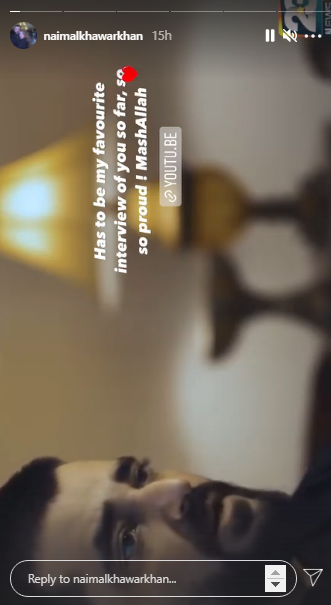 Hamza Ali Abbasi stated in his interview that, “According to Quran and sunnah there are separate orders for woman and men. A man is ordered to mind his own business regardless of what is going on around. He has to give an account of his doings.”

Remember that women’s clothing is currently being debated in various circles.

What women should wear and what not, women’s clothing is also being criticized on the increasing incidences of sexual abuse on various platforms.

In this regard, Hamza Ali Abbasi has expressed his views in an interview.

Actor Hamza Ali Abbasi, while talking about other topics in his interview, “As far as my own self is concerned, whatever a woman is wearing or whatever she’s doing is not a variable in my judgment. The same goes for a woman, she has to give an account of her doings regardless of the fact what men are doing in the surroundings. Everyone has to give an account of their own actions and intentions,” he added.

Hamza Ali Abbasi, who is both handsome and talented, was recently seen...