The fresh face of the Pakistani showbiz industry, Areeba Habib worked as a model for international and local brands as well as in few popular drama serials.

Areeba Habib, in her recent clicks from Minal Khan’s wedding, looks timelessly beautiful as she donned a stunning white lehenga infused with ash-grey stonework and left fans gushing over her elegance.

She glammed up her statement look with an ivory shimmery smoked eyeshadow and paired it with nude lips. The actress accessorised her beautiful outfit with a neckpiece, matching studs and rings.

An enchanting single red rose tucked behind her hair with hair falling in waves added more charm to her beauty.

However, in an amusing turn, the internet users think that Areeba Habib shares an eerie resemblance with Bollywood diva Katrina Kaif but some are convinced Habib is even more beautiful than Kaif.

The netizens began commenting on her likeness with the Bollywood actor after gorgeous pictures of her at Minal-Ahsan’s wedding surfaced online. 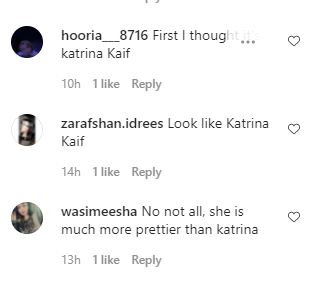 Who need to have Madhoori and Katrina when you have Hamza Ali Abbasi's sister-in-law (Fiza Khawar) and sister (Fazeela Abbasi)✨ 😍 pic.twitter.com/XVwtdffaVl

Back in August, Habib had shared a few photos from her engagement ceremony on Instagram. In the pictures, she can be seen with her close family rejoicing at her home.

Her fiancé Saadain Imran can also be spotted in the photos shared by the actress.

Moreover, Habib made her acting debut with the drama serial Koi Chand Rakh and later appeared in dramas including Qadam Qadam Ishq and Janbaaz.

Lastly, she worked in the drama serial Jalan alongside Minal Khan and Emmad Irfani.

Did you know which is the worlds famous black sand beach?

Reynisfjara is a world-famous black-sand beach found on the South Coast of...

Did you know? You can buy square watermelons in Japan

It doesn't matter what shape the watermelon is, it's what's inside that...