The most lovely and adorable actress Sana Javed, who has begun her journey from Ms to Mrs with singer Umair Jaswal, has left fans drooling over her million-watt beauty.

Sana Javed never fails to impress her Insta with her stylish attires and undeniable divine looks.

Recently, she appeared alongside actor Bilal Ashraf and proved their ultimate chemistry posing for the most recent regal photoshoot.

However, these ethnic looks of the actress on Instagram left the netizens in awe.

The accessories she wore added more charm to her beauty. She complimented her look with statement neckpieces which were teamed with heavy earrings, bangles and stunning rings.

For her glam, she left her wavy middle-parted hair down and completed the ensemble with shimmery eyes and nude lips. 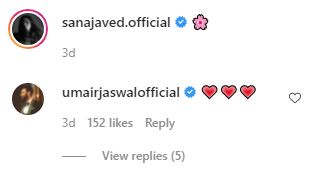 The post has garnered immense love reacts within very less time as fans are drooling over the actress’s ultimate beauty.

The actress is undoubtedly a beautiful and talented actress in Pakistan’s showbiz industry. She never fails to impress her followers through her acting skills or undeniably good looks.

She is famous for her roles in popular dramas Khaani, Romeo Weds Heer, and Ruswai in which she appeared in the main lead roles.

Currently, the actress is seen in the drama serial Dunk, which is a super hit,  alongside Bilal Abbas, Nauman Ijaz and others.

The most lovely and adorable actress Sana Javed, who has begun her journey...