Sarah Khan, sometimes known as Sarah Falak, is a Pakistani actress best known for her role as Miral in the television series Sabaat. Khan made her screen debut with the drama Badi Aapa in 2012, after which she had done small roles in a number of successful television shows.

She becomess famous after appearing in the love drama Alvida as a selfish opportunist. Khan won an Award for Best Supporting Actress for her role as a forceful housewife in the mystery thriller Mohabbat Aag Si. She subsequently garnered wide recognition and public appreciation for portraying leading roles in the romantic drama

One of the gorgeous Pakistani actresses and soon mommy-to-be Sarah Khan, who is expecting her first baby with Falak Shabir, has never failed their fans in terms of beauty.

Recently she can be seen in Lapata drama, portraying the role of Falak in which she proved her fashion sense

In the recent episode, khan wore a saree for the” mayoun” function in which she looks stunning and fans started to compare her with the real “mayoun” dress she wore at her wedding.

take a look at the comments! 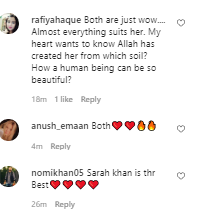 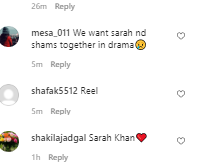 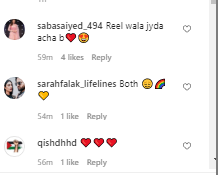 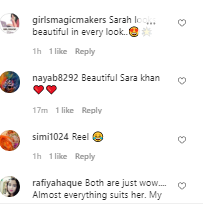 What beautiful gift did Sarah Khan give to her younger sister Noor Zafar?

One of the gorgeous actresses of Pakistan’s showbiz industry and soon mommy-to-be Sarah...