Pakistani actor and host Yasir Hussain, who is quite active on social media and often keeps lots of eyeballs attracted to him, has taken a jibe at politician Sharmila Faruqi after she schooled Iqra Aziz that fathers don’t deserve a pat if they take responsibility for their kids.

Two days back, actress Iqra Aziz felt proud as she had shared a picture of her husband Yasir Hussain changing their newborn son Kabir’s diaper, which didn’t impress Sharmila Faruqi. “It’s nothing to be proud of or anything special,” she said.

“I’m so glad your husband is hands-on but it’s nothing to be proud of or anything special. All good, involved fathers do this for their kids. My husband bathes, changes diapers, feeds and takes our son for his pre-school if I’m at work or unwell. And he loves it,” she commented under Aziz’s post.

However, Yasir Hussain isn’t having any reservations by the politician. He took to his Instagram to openly mock Faruqi for schooling her wife publicly.

Commenting directly Hussain said, “You’ve issues with everything but not by destroying the country with grave politics.” 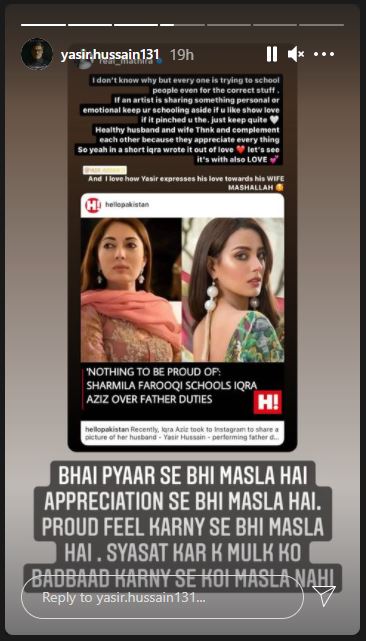 The Qurbaan starlet had posted a lovely snap of her hubby changing clothes and diaper of the little munchkin.

Taking to Instagram, the actress penned a long note for Hussain, praising how a perfect husband and father he is.

She captioned this post, “pamper and clothes change session before leaving for work.” The Khuda Aur Mohabbat 3 actor went on, “P.S., he changed Kabir’s clothes for the first time.”

The Suno Chanda star then thanked Yasir for helping her “so much” during “this new phase of motherhood.”

She added, “I am so proud of you Yasir Hussain, you’ve helped me so much from pamper changes to holding him while I rest for a bit and making me breakfasts.”

It is pertinent to mention here that the power couple had welcomed their first baby boy Kabir Hussain in July.