Pakistan’s top fashionista Nausheen Shah opened up about the controversy for being an “uninvited” guest at Yasir Hussain and Iqra Aziz’s wedding back in 2019.

The Deewar e Shab actress, during an interview with host Tabish Hashmi, shed light on Yasir Hussain’s wedding controversy saying: “I go to celebrity weddings without getting an invitation, I crash weddings and I love it.”

Earlier, Yasir had revealed that Nausheen had attended the wedding forcefully even though she wasn’t invited.

The host then said that those celebrities are making headlines over such news to which Nausheen quipped, “I think we should leave it and we should not give a lot of mileage to this. The public has already criticized them a lot.”

“I don’t know but I feel sad, I genuinely feel sad about this and such things show your nature,” she concluded.

However, actor Yasir Hussain, who is often spotted speaking on prominent issues and about co-actors rights, is quite displeased about Shah’s recent remarks.

He took to his Instagram story and bashed the actress for stating things based on lies. “After two years of my wedding, she is still trying to cash her previous statements.” “What do you want sister,” he asked. 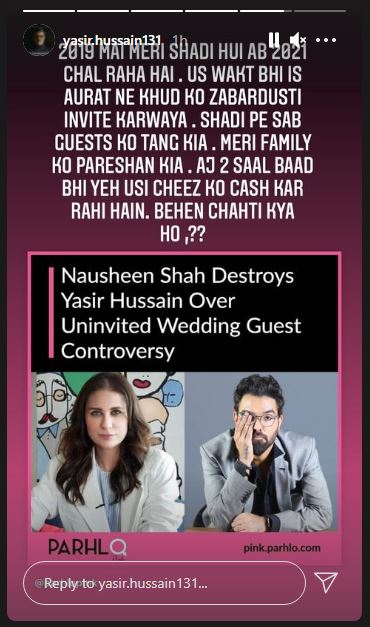 In another story, the scriptwriter added, “Please miss Shah get a life.” “Or else I will now present the proofs on social media that how much you irritated me and my family for the invitation,” he warned.

“What is this obsession with my wedding?” he questioned bitterly. 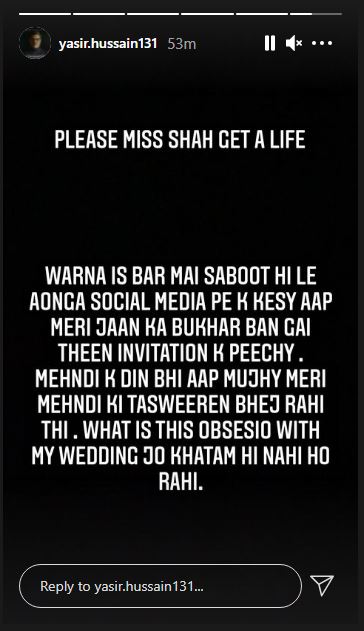 On the work front, Nausheen Shah is being highly praised for her performance in the drama serial Pehli Si Muhabbat.

The position of the actress has come to the fore when Yasir...

Waited 30 years to see Pakistan down India in a CWC game: Inzamam