Maira Khan, in the video, can be heard ridiculing people on the basis of class differences. To which Zarnish Khan responded saying: “I don’t believe being called burger or paindu determines any kind of class or status,” she wrote on her Instagram story.

“Universal morality cannon be divided into classes. It’s for everyone. to follow, and if the criteria of looking cool determine, how respected you are in society, then I must say we have doomed ourselves, she added. 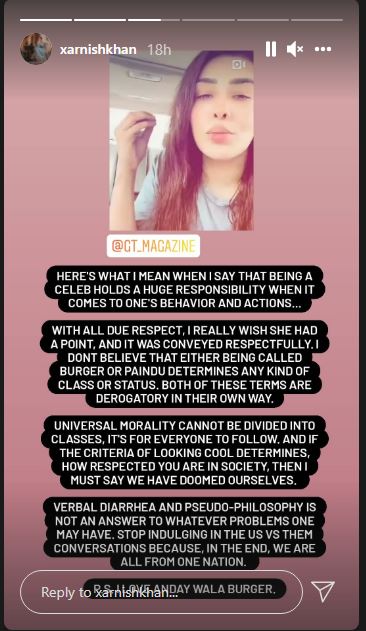 The Sun Yaara star hitting back at the Jalan starlet went on to add, “Veral diarrhoea and pseudo-philosophy is not an answer to whatever problems one may have. Sto indulging in the US vs Them conversations because in the end, we are all from one nation.”

However, the video has received intense flak among the netizens and Khan was subjected to heavy trolling after her classist remarks.

Zarnish rose to the pinnacle of fame as she essayed the role of Alizeh in Susraal Mera.

On the work front, she was last spotted in the highly praised drama serials Yeh Dil Mera where she starred alongside Sajal Aly, Ahad Mir, Adnan Siddiqui and Mira Sethi.

BEIJING: China has said that it will investigate energy price index providers,...